Over the centuries, one of Ireland’s greatest exports has been its people. This has taken many guises be it voluntarily to travel the world, to explore seeking fame and fortune, economic migrants, trade, colonise, govern or forcibly transported, to fight or to garrison some far off settlement".

It is estimated that there are over one million people of Irish birth in Britain today, plus numerous second, third or fourth generation Irish - precise figures are not available. Over 40 million persons in the United States, 30% of Australians and 15% of New Zealanders also claim Irish ancestry.

The major challenge to those of us with immigrant ancestors is to actually confirm their place of birth, without this it is nigh on impossible to undertake any research within Ireland, even if you are trying to research a fairly uncommon surname.

One of the sources for determining place of birth is passenger lists. It is important to remember however that from the 12th century the English crown had a claim on Ireland and from 1801 (Act of Union) until 1922 the whole of Ireland was officially ‘British’ and therefore people moving between Ireland and the British mainland were actually travelling within the same ‘country’ and therefore no records of these movements exist. One also has to remember that at the shortest point it is only 22 miles between Ireland and the British mainland. Although your ancestor was Irish the embarkation port to the new world could have been anywhere in the British Isles.

The advent of the internet and involvement of commercial companies in genealogy has made feasible the indexing of a number of major series of passenger lists, making them easier to use removing the necessity of knowing exactly which ship your ancestor travelled on. It was far more common than might be imagined for people to undertake long haul journeys in the late nineteenth and early twentieth centuries – not specifically to immigrate but in the course of normal living. The information found in passenger lists does vary but can contain the name of passenger, age, occupation, home address, address of friends or family in destination country, port and date of departure, port and date of arrival and vessel name. If available check the various versions of a passenger list eg leaving the British Isles and arriving at Ellis Island as the information may differ.

There are few passenger lists listing people leaving the British Isles prior to the 19th century - arrival in the new country is more likely to have been recorded than departure from the old. The Society of Genealogists (London) holds one of the best collections of printed material relating to emigration, their catalogue is available online, www.sog.org.uk Additionally Familysearch.org maintains a considerable collections of lists compiled from sources worldwide. Their library catalogue can be accessed via your local family history centre or online at www.familysearch.org/eng/Library/FHLC/frameset_fhlc.asp

The National Archives (London) has an excellent research guide on passenger lists which can be found at www.nationalarchives.gov.uk/catalogue/RdLeaflet.asp?sLeafletID=106 Findmypast.com has indexed the Board of Trade passenger Lists (BT27), Outwards Passenger Lists 1890-1960. The database contains the names of people departing from ports within England, Wales, Scotland and Ireland for final destinations outside of Europe. Some vessels dropped off and picked up passengers in European or Mediterranean ports en route and these entries can be picked up in the records. The names found are linked to the original passenger list images which are held at The National Archives, London (TNA).

Ancestry.co.uk features an index to the Board of Trade passenger Lists (BT26), of ships arriving in the United Kingdom from ports outside of Europe from 1878 -1888 AND 1890-1960. Exceptions to this are vessels that originated outside of these areas but then picked up passengers in European or Mediterranean ports en route. The UK port of arrival was not necessarily the final destination of the ship. In addition, the names found in the index are linked to images of the passenger lists originals of which are located at TNA.

The Scottish Emigration Database www.abdn.ac.uk/emigration, created by the University of Aberdeen contains the records of over 21,000 passengers who embarked from Scottish ports between 1890 and 1960.

Records relating to early emigrants to the West Indies, American colonies, Australia and New Zealand have been published, much is available online via commercial websites. As always it is important that you check the original source material as it may contain extra information. Merchants and travellers abroad may also be located amongst records at TNA.

The US National Archives and Record Administration (NARA) have an online guide to immigration http://1.usa.gov/1Meq6F6 containing details about passenger lists. In addition to the federal records, state and city lists have also survived. Consult the appropriate state or city archive for copies of these.

The Centre for Migration Studies, Ulster American Folk Park, Omagh, as part of its Irish Emigration Database, has 3415 passenger lists, listing Irish emigrants travelling to North America, mainly dating from the 1790s onwards. There is no open access online to these records however they are available through Northern Ireland libraries, Local Studies Departments and also at the Public Records Office of Northern Ireland (PRONI) in Belfast.

A very useful publication (or rather series) is the Passenger and immigration lists index: a guide to published arrival records of about 500,000 passengers who came to the United States and Canada in the seventeenth, eighteenth, and nineteenth centuries, edited by P. William Filby, with Mary K. Meyer. It is available in most major genealogical libraries around the world.

As part of their immigration dataset www.ancestry.com has Passenger Lists of vessels arriving at New York 1820-1957. A copy of original records can be found at the US National Archives and Record Administration (Washington DC). This database includes both the Castle Garden and Ellis Island passenger lists.

Many immigrants to America actually entered America via Canada – the fares from Europe to Canada were generally cheaper than those going directly into the American ports. It has been estimated that 40% of passengers arriving in Canada in 1895 where actually bound for the USA.

Ancestry.com has recently indexed the U.S - Canada Border Crossings 1895-1954, 1.6 million names recorded at almost 200 entry points. This is in addition to the Canadian Passenger Lists, 1865-1935 they host, which contain more than 7.2 million names. There are no comprehensive lists of immigrants arriving in Canada before 1865. Ancestry.com also hosts Irish Canadian Emigration Records, 1823-1849, containing various records and reports of Canadian emigration agents Allison and Buchanan.

Distance meant that numbers emigrating to Australia and New Zealand were smaller and more controlled, with passenger lists kept at the port of arrival. A fact sheet about Australian passenger lists can be found at www.naa.gov.au/about-us/publications/fact-sheets/fs227.aspx

There are a number of sources that can provide information on the emigration experience, for example the Government set regulations for its local agents when selecting emigrants for free passages to New South Wales, Western Australia, Tasmania and New Zealand. The Regulations set out what bedding was provided for emigrants, what clothing it was expected they would need for the voyage and what trade tools they could take. You can also occasionally find references to payments covering emigrants’ travel expenses to their port of embarkation in parish records.

More information about the actual ship (often including an image) can be found linked to the passenger lists on some commercial websites or these can be located at the appropriate maritime museum or library.

This is just an idea of the information available. New datasets are going online everyday so just check out your favourite websites to see what information they have.

This article featured in issue 70 of Irish Roots magazine www.irishrootsmagazine.com 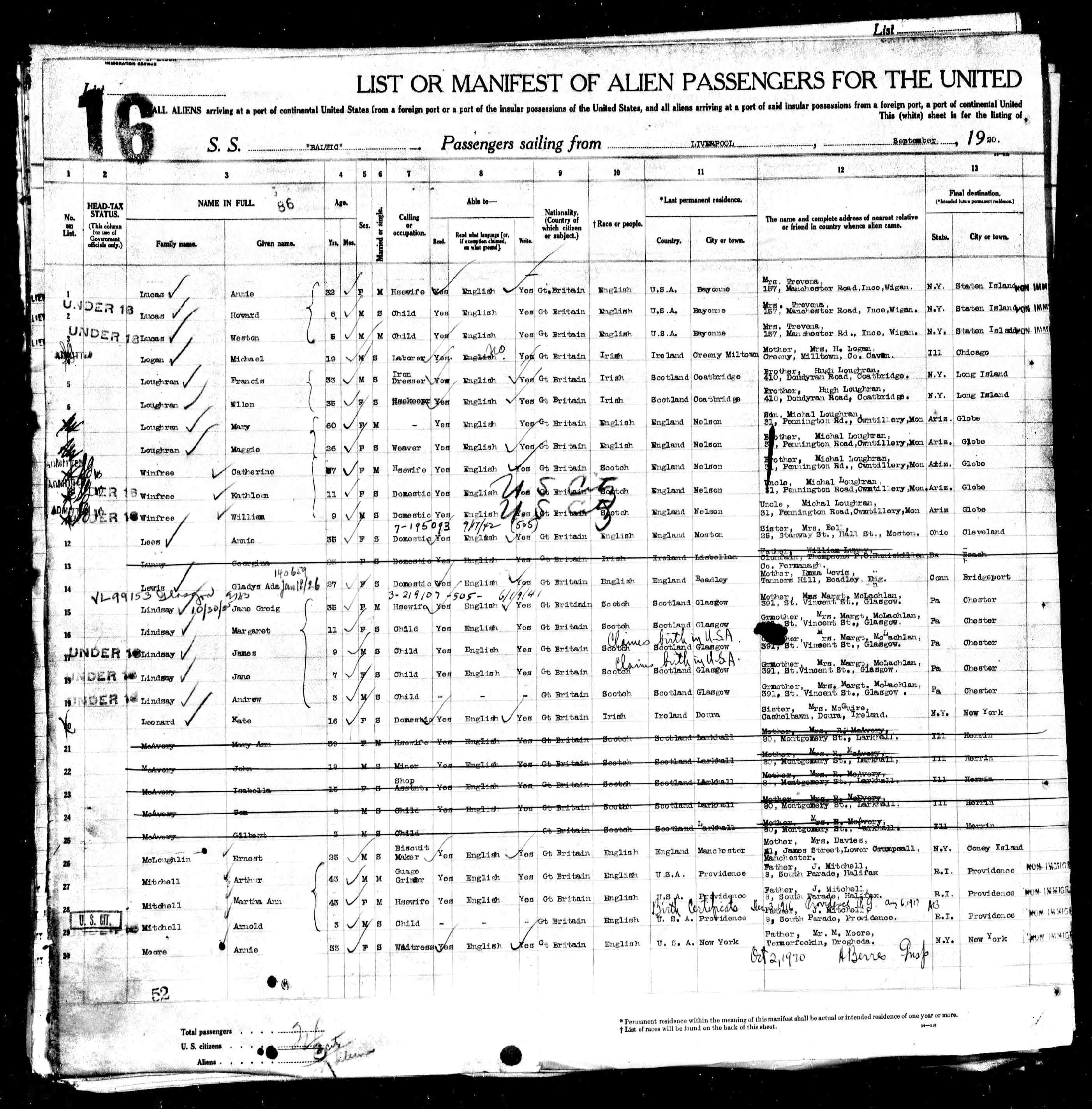